skip to main | skip to sidebar

Sunday of the third week Eric, Elias, and I took a ride in a large van west of Accra to two small, veryold coastal towns. They both are fishing centers, 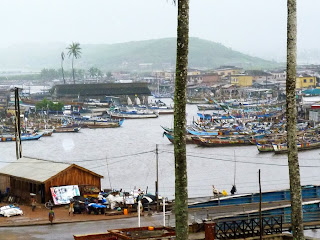 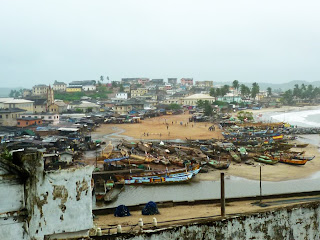 Elmina Lagoon
cannon lined up on shore
where fishermen go to sea in 40 ft to 50 ft hand made wooden boats called Cannon that look like very large canoes. The cannon are made in a similar method to the coffins, or perhaps it is the other way around. They are brightly painted and appear frightfully small out on the ocean.

Elmina Castle looking back at town

Another note worthy aspect of Elmina and Cape Coast is that they were centers for slave trading. First started by the Dutch and then taken over by the English. Previously, these areas were centers 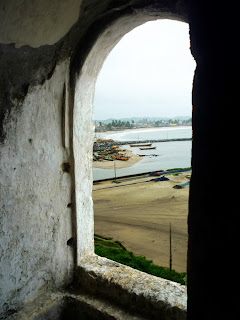 for gold trade. In fact for many years Ghana was known as the Gold Coast. But two things happened to change the trade to slavery. The value of slaves outstripped the value of gold and once people began to be captured the amount of mine workers declined and sources of gold began to diminish.

The local people would capture others likely to be used as slaves and the Europeans would trade for them and ship them to the Caribbean or the British colony in America. To protect their trade and assets the Dutch had taken over a Portuguese fort in Elmina and expanded it into a castle, made of rock and brick. The English later built a fort on a hill over looking the castle that the Dutch had used previously to attack the English after they had taken over the castle. All very convoluted and even more interesting when you find out that the Danes were involved for a time as well.

Positioned at the ocean's edge of an extraordinarily picturesque colonial town, the castle of Elmina is an imposing white structure that efficiently held and processed hundreds of men and women at a time. The guide who explained the several areas and uses of the building pointed out how the 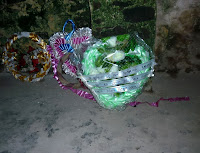 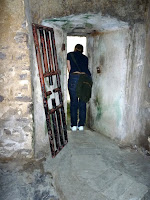 Dutch governor would stand on a balcony of his 4th floor living quarters and have his men bring out into the courtyard all the women being held. This was so he could choose one to rape. This woman was secreted up through the building and finally through a trap door outside the governor's bed chamber for his use. It is a very eerie feeling to listen to so matter of fact a description of such cruelty and inhumanity.

The whole time we were there the rain poured and poured. So, it was a quick trip or so it seemed. After the castle, we went to dinner at a restaurant in a colonial era building right on the lagoon across from the castle. Perhaps you can see it in some of the pictures. At the end of dinner, we caught a cab (they are everywhere and quite inexpensive compared to US taxis) and raced as only Ghanaian taxi drivers can (there should be a thrill ride somewhere called Ghana taxi driver. Have I mentioned I have only seen three functioning stop lights and no stop signs since I arrived) back east toward Cape Coast.

Cape Coast Castle
Once there, we were to load on to another van taking us back to Accra and eventually home to Teshie. Well, vans like these have no schedule. They sit until they are full and then they leave. We happened to arrive as a van just filled up and was leaving which meant we were the first in the next van and a wait in store. So having not seen much of Cape Coast I took off walking toward where I thought the castle might be and sure enough found. But before getting to the castle I walk up to a skeleton of a building that a sign described as the future home of the Cape Coast Slavery Museum. 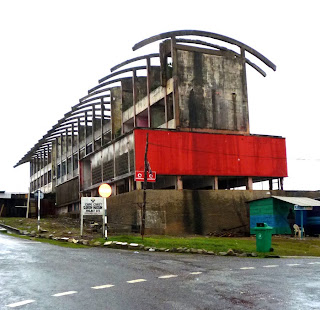 The structure is beautiful in its bony, hulking appearance. Somewhere it was mentioned that it used to be a church and it seems fitting. From there I walked on to the castle and took the panorama picture you see here. Then I got a call from Eric who said the van was getting close to full and that I better get back quick. So, I started to jogged back as quickly as I could, having stretched my 15 minute walk into about 30 minutes and fearing I might be left behind. As I was doing my 60 year old style jog a woman who was walking towards me with a group of other women all dressed in blue and white printed dresses with matching head scarves yelled out "Oh, a race!" and proceeded to jog along with me for 100 yards or so shouting exaggerated encouragement. I thanked her for support with a laugh and waved goodbye as I hurried on my way. Getting to the van, a bit breathless, I proceeded to jump through the open side door into my seat sopping wet and sat there for another 30 minutes waiting for one last person to fill the van.

Luckily, I found a place to lay out my rain jacket so it could dry (if anything ever really dries during the rainy season in Ghana) and could watch a family and friends dancing (the music was probably at 85~90 decibels, as is most music I hear here) in the rain, mostly under a tent, in front of a church celebrating something. When the last person appeared we closed the doors of our brand new (this is a rarity) Ford full sized van holding 15 passengers, the driver turned the AC up to max which blew out of the console in the ceiling right at my chest. This felt great for the first 30 seconds and then it became really cold. As I was trying to enjoy my first sub 80's~low 90's temperatures and 90% humidity since I have been here, the driver plugged in a DVD and a TV flipped down from the console right in my face and began showing the Best of World Wrestling Federation. I thought I could probably avoid watching it but it was getting dark quickly and it was fast becoming the only thing I could see, except something else I will describe a little bit later. Now, to act as background music to US mega wrestling, the driver popped in a CD of American Soft Rock Gospel music and proceeded to hold one hand in the air with palm forward waving side to side to the beat of "Our God Is an Awesome God" and singing along. At this moment I am thinking I am pretty used to new experiences and sensory overload coming my way in Ghana, but this is something to write home about. And then I realize that this guy is going 80 miles an hour, on an unlit two lane highway, where every three or four minutes there is a big red roadside sign that says "Over Speeding Kills - 12 people died at this spot". And I only wonder for a moment about the use of the word "Over" with the word "speeding" which already carries its own baggage of being "over". I wondered if 80 miles an hour qualifies as over-over speed. And then I see why he is going 80 miles an hour. We are coming up on a slow moving truck that is approaching a blind curve and I know the driver figures he has to get around this slow moving truck before anybody comes screaming around this blind curve and gets there before we do. And you know "Our God Is an Awesome God", so, nothing is going to happen to us anyway. I think for a moment that I could scream that the dashed lines in the middle of the road have become solid, which means that passing may be unwise when to my surprise the single solid line becomes three solid lines and I figure this should slow his pace but no he kicks it up to 85 and zzzzooooomm around the truck at light speed and by golly there is the glare of lights ahead coming from the blind curve and the van just barely zips in between the truck and the on coming car!!! I look around. Two guys are asleep and everyone else is watching 'The Undertaker' whip some guy named 'Brad' into the corner post of the ring, but Brad's got it all figured out because he jumps up onto the ropes and does a back flip and catches The Undertaker's head between his legs and slams him to the mat. And then the guy next to me says he heard that this wrestling isn't real……..
The driver found no vehicle and no road situation impassable for the rest of the trip back to Accra. I watched the entire Best of WWF and sang along with "Our God Is an Awesome God" when it came around again with hand raised, palm forward waving side to side to the beat.
Posted by Michael deForest at 12:38 PM